Residents Needed A Map in 1928 McMinnville

Home/Uncategorized/Residents Needed A Map in 1928 McMinnville
Next

Residents Needed A Map in 1928 McMinnville

Article originally published in the October 1998 edition of The West Side, the official YCHS newsletter. Written by historian and West Side editor John White (1928-1999). 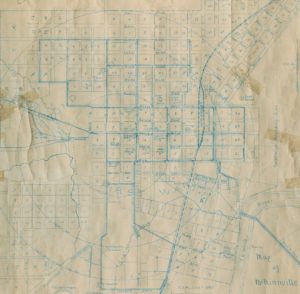 1906 Map of McMinnville, showing the street names in place prior to renaming in 1928. Courtesy of McMinnville Downtown Association

The preamble to McMinnville City Ordinance Number 1765 adopted unanimously by the City Council on 3 April 1928 reads as follows:

“WHEREAS, in laying out Additions to the City of McMinnville, in many instances the streets in such Additions have not been given the same name as the streets of which they are a continuation, and in several cases some particular street or streets have been given the same name as other streets in previously laid out Additions, thereby giving to some streets two or more names, and in some cases by reason of duplication the City has two separate and distinct streets bearing the same name, and in some instances numbers have been used for designating streets, but such numbers have not been adopted so as to run consecutively, and all of these conditions are extremely unsatisfactory and can cause much annoyance and confusion in answering fire alarms as well as locating homes and other property for making mail and other deliveries, and result in a general confusion in attempting to locate such streets bearing more than one name, or duplicate streets bearing the same name as now fixed and designated upon the several plats of the Original Townsite and the several additions thereto; and “WHEREAS, all of such confusion can be eliminated by renaming such erroneously named streets and by eliminating all duplications in names of such streets as now exist, and in all cases where numbers are used instead of names, these numbers shall be used in their consecutive order in order that a street so designated by name can be readily located by counting consecutively from a given point; and “WHEREAS, many of the streets both in the original townsite as well as additions thereto are designated by letters rather than names, and it appears that names will be more satisfactory than the use of letters for such purpose, and the names of McMinnville pioneers will be appropriate in substituting same for such letters in naming the streets within the City.”

William Newby laid out the town of McMinnville in 1856 with the original townsite plat showing only ten streets defining a very few blocks in what is now the downtown area. Over the years several tracts were annexed to accommodate population growth from almost nil in 1856 to nearly three thousand by 1928 and with new street designations apparently left to the whim of developers, the city street grid had become quite confounding to even long time residents. Ordinance Number 1765 established a permanent comprehensive solution, but for some time after enactment the additional confusion of more than 75 street name changes must have been great indeed.

In terms of the present day, the only ones retaining their original designations were: Lafayette Avenue, Third, Yamhill, Lincoln, Shady, Vine, Storey, Villard and Handley Streets. Additionally, sufficient McMinnville pioneers existed so that the old “alphabet streets”, A through N, could be renamed in their honor as the Adams through Newby Streets we know today. Beyond this however, the project became a bit more complicated.

The numbered streets First through Fifth were revised to run consecutively south to north instead of the previous north to south:

This sequence was then continued by converting already named to streets to numbered ones (old designations in parenthesis):

Moving out beyond the original town plat with named streets these revisions were made:

If upon reaching this point readers are thoroughly confused and having difficulty absorbing all these changes, consider for a moment the ramifications for letter carriers, delivery men and emergency response personnel. Undoubtedly adding to the dissonance was the fact that several street names were discarded in one location only to be reassigned in another! (i.e. Cleveland changed to Elm, Elm to Alder, Alder to Cedar, Cedar to Ninth, etc). It would seem quite likely a resident of the time might be required to clarify his location as being on either the “new” or “old” Adams, Newby, First, Washington, etc. Street.

Sadly, in the process of implementing all these revisions, some well-deserving persons lost the distinction of having a street named in their honor. Such names as Cook, Cooper and Saylor no longer appear at all, although some like Braly and Fletcher have been reestablished in more recent times.

Another aspect of persons deserving recognition arose during the process of selecting prominent names for the A to N alphabetical sequence. In some cases the choice was simple with only one candidate for a particular letter of the alphabet, while others might have two or more possibilities; each with its contingent of supporters. Some final designations were not easily or amicably resolved, but that’s a tale for another day.