Article originally published in the Summer 1998 edition of The West Side, the official YCHS newsletter. Written by historian and West Side editor John White (1928-1999). 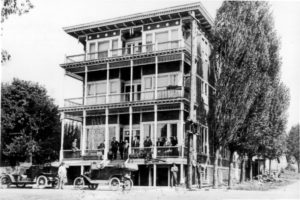 At the turn of the century North Yamhill was a bustling agricultural community with a population of around 350. The town also boasted several establishments and services usually found only in towns of larger size. There were electric lights, two schools providing grades 1 through 12, a newspaper, a dentist, at least a score of thriving retail establishments, a bank that withstood the “panic” of 1896-97, a planing mill, a tile factory and other numerous enterprises and organizations.

In addition to being a trading center for the northern part of the county, North Yamhill was also the transfer point between the railroad and stage line for travelers going to or coming from the Tillamook area. Prior to 1902 the necessary overnight accommodations for travelers making this connection were limited to an aging 1870s vintage hotel plus a small rooming house or two. Prominent townspeople believed this lack of a good hotel reflected badly upon the entire community and during December 1901 they raised a sum of $2200.00 with which to entice an entrepreneur to build and operate a first rate facility. This need became even greater in the spring of 1902 when fire destroyed part of the old hotel requiring the entire structure to eventually be torn down.

Shortly thereafter a local jeweler, inventor and prune dryer owner, E. F. Schneider, took up the challenge of building a new first class hotel The site selected was a conveniently located vacant lot on the northeast corner of Maple and First Streets and excavation of a 30×60 foot basement began in June of 1902. The August 2nd 1902 issue of the North Yamhill RECORD reported progress on the job as follows; “E.F. Schneider has a large force of men in the work of construction on the new hotel who are pushing the same forward to completion as rapidly as possible. The new building will be a skyscraper for this place and will be a credit to our town, and to Mr. Schneider the builder”

When completed this “skyscraper” would be three stories high with a full basement underneath. To insure an adequate water supply, a well was put down on the Sarah Williams property at First and Fir Streets. A gasoline engine and pump were then installed at the wellhead and an underground pipeline laid to carry the water four blocks west to the hotel.

Construction continued at a fast pace into the fall of 1902 while the RECORD related “Since the old hotel has been closed and pending the completion of the new hotel we hope those of our people who have spare beds place them at the disposal of the traveling public until such time as the new hotel is completed. People coming to our town must have accommodations and be shown every possible courtesy. We would suggest that families who have beds to spare would make the fact known to the liverymen who can direct travelers to them. It would be unfortunate for travelers and give our town a black eye if we should fail to provide for them while they are in town.”

In late November 1902 Ed and Mrs. Schneider moved into their quarters in the new building. Although construction was not completed, the kitchen, dining room, parlor and a few guest rooms were ready permitting some travelers an opportunity to spend the night.

When the upper floors were finished in mid December, the brand new Royal Hotel had its official opening, an event the REPORTER recalled with glowing praise: “The upper story of the Royal Hotel is entirely finished and is magnificent. There is no better equipped hostelry in Oregon for the entertainment of guests than this one, save perhaps for Portland.. It is equipped with all the furnishings requisite to making it a neat and creditable building throughout and is filled with appointments making it a first class hotel in every particular.”

The main entrance was located on the first floor facing Maple Street. At the front on the main level were the public parlor and a jewelry shop. To the rear were the laundry, kitchen and diningroom. Later the Tillamook stage ticket office and, briefly, offices of a venture called Ashwood Gold and Silver Mining Co. (an enterprise in which Ed Schneider was also involved) occupied portions of the first floor.

The second and third floors were devoted to ten guest rooms each that were equipped with comfortable beds and “kept in a manner to please the most fastidious touring lady”. None of the rooms had running water but “modern bathing facilities” were located on each floor. Although no reason for the difference was offered, contemporary ads quoted rates of $1.25 and $2.00 per night (meals not included).

A saloon accessed directly from Maple Street occupied the front portion of the basement with general storage and space for several cords of firewood at the rear. Later this lower level was converted into a shooting gallery.

Transportation of travelers to and from the railroad station was accomplished by a “carryall” drawn by two fine chestnut horses supplied by John Williams’ livery stable and driven by “Dad” Gage. This connection was to last only until 1911 however when a railroad link was completed between Forest Grove and Tillamook that quickly put the stage line out of business.

For the next few years the Royal Hotel continued moderately prosperous operation, but loss of the Tillamook travelers took its toll. Ed Schneider eventually sold his hotel to the dentist. Dr. E . R. Flett. Ownership was subsequently passed on to several proprietors before the once elegant but by then decaying structure was torn down during September 1938 ending a colorful era of North Yamhill history.