Home/Uncategorized/The Red Electric – Ahead of its Time?
Previous Next

Article originally published in the January 1997 edition of The West Side, the official YCHS newsletter. Written by historian and West Side editor John White (1928-1999). 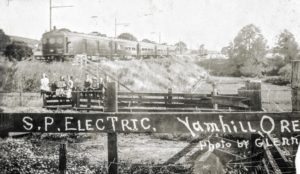 Recently (1999) local government officials expressed interest in exploring the possibility of providing commuter rail service between Portland and the more populated areas of the County. While the reasons for contemplating such a plan are a product of today’s needs, the service itself would be nothing new. Eighty three years ago this month “Red Electrics” began operation over the same routes that are being discussed today.

In an effort to counter growing competition for regional passenger service, the Southern Pacific Railroad began electrification of its secondary Willamette Valley routes in 1912. Noise and smoke belching steam engines and outdated chair cars were replaced with more comfortable smoother riding electric powered coaches. The term “Red Electric” was derived from the barn red paint applied to units operating on the west side of the Willamette which was intended to distinguish them from counterparts of a dull green hue traversing tracks on the opposite side of the river

Service for Yamhill County began during January 1914 amid speech-making at each community along the line and of a magnitude usually reserved for elections or Fourth of July celebrations. There were actually two routes that composed what was termed “the Yamhill Loop” with both originating at Portland’s Union Station. The so-called East Side run headed out via Lake Oswego, Tualatin and Sherwood before entering Yamhill County through the Chehalem Gap at Rex. From there the line continued on through Newberg and Dundee to St. Joseph along the same road bed used by Willamette & Pacific today. The West Side portion of the loop left Portland by way of Beaverton and the Tualatin Valley before branching southward at Forest Grove through Yamhill and Carlton to connect with the East Side run at St. Joseph. A single line continued from St. Joseph south through McMinnville, Whiteson and Amity before terminating at Corvallis. Service was extended to Sheridan and Willamina via steam locomotive over the Southern Pacific’s short line connecting at Whiteson.

Fares were generally modest, although they did increase occasionally after World War I. A sampling of rates shows a round trip from either Amity or Yamhill to McMinnville cost $4.50 while Newberg to Portland and return was $1.40.

With a modem rail network Unking communities in the county together as well as providing them state of the art service to metropolitan Portland, the future appeared secure for Southern Pacific’s passenger operations west of the Willamette River. By 1920 however fare revenues had begun a steady decline. Proliferation of automobiles and continuing improvements to the roads upon which they operated were taking their toll. Over the next few years Red Electric service was increasingly curtailed until eventually discontinued during 1929. By the end of that year nearly all traces of the overhead power lines had been removed and much of the electric rolling stock transferred to other Southern Pacific interurban lines in the San Francisco and Los Angeles areas.

Southern Pacific itself contributed at least in some part to demise of the Red Electric by initiating its own highway motor coach service during 1927. In turn, this bus operation was taken over in the 1930’s by Greyhound Stage Lines, a company in which the Southern Pacific was a principal investor.

About all that remains of the Red Electric in the county today is a rather dilapidated concrete substation alongside the tracks at Dundee that once transferred 1500 volts to its overhead wires. Whether or not a new interurban rail system might provide a viable solution for today’s congested highways is unknown, but it would be an ironic twist indeed should the automobile, largely responsible for the Red Electric’s removal, be the cause of its eventual reincarnation.